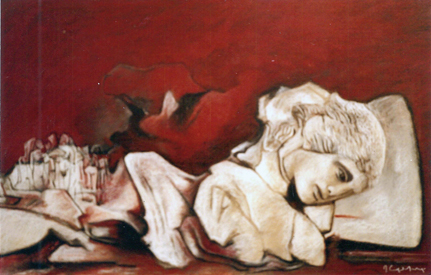 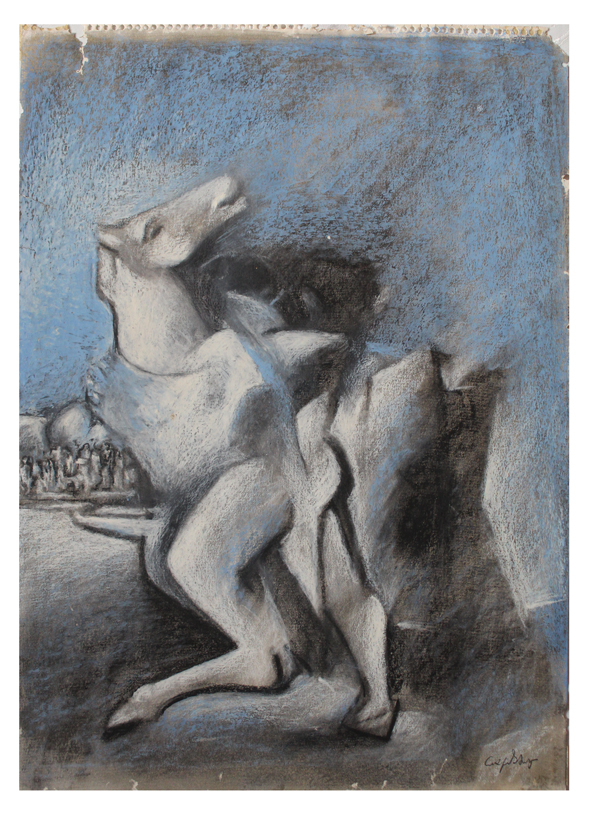 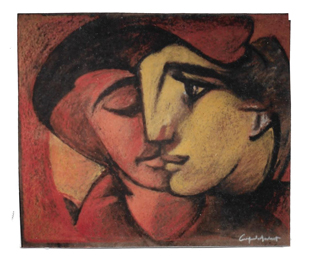 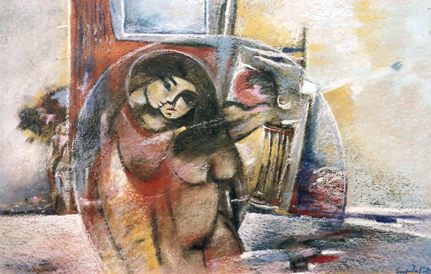 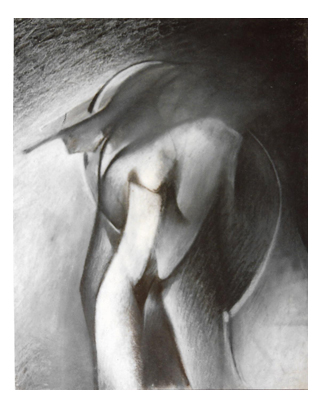 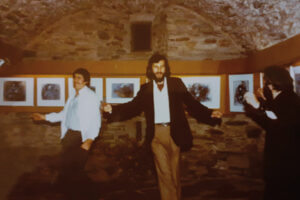 Pantelis Sabaliotis will open the doors to his very first exhibition outside of Greece in Zurich, Swiss, in 1979. In September 1980, he presents the series “Immigrated Caryatids”, in Cordes-sur-Ciel, southern France. A place that represents an important milestone in his artistic development. Not only for his early work, but also for his latter, “Metaplaseis”, a series of works, which he presents over 25 years later in Aveyron in 2006.
“The feminine“, the artist once said, “is an essential element in most of my work. Depending on the series of works with a different value.” (From an interview with Frosso Pavlou, “Selides Magazine”, 1999). The 16-year-old’s first exhibitions are still marked by his inclination towards surrealism and realism. Already in 1979, when he was 24 years, after experiencing endless journeys across Europe, he found his individual style, his material: oil pastel on paper. Perfect for traveling – a box for pens and a folder for paper. The preoccupation with antiquity, with the actual roots of civilization, will from now on accompany him. His close relationship with the sea, the deep connection to the Thessalian earth, the blue of the Aegean Sea and the red of the earth, all these are characteristic elements of his work. Just like the rounding, the curve, which soothes any tension on surface.

He has found his style and topics, still constantly developing. In September 1980, the “Caryatids” in Cordes were faceless groups of women who seem to merge with sea and rocks; in January 1981, the “Women of Troy” in the Athenian gallery Au Roi Soleil, on the other hand, returned to the angular edged figure. Reduced figures, supplemented by abstract boats and a door, a kind of passage. The way to a new world, which for him was called Europe. In June 1981 he returned to the south of France. In the Musée d’Enfance de Toulouse Lautrec he presents himself as playful, almost Chagallesque. Birds appear as well as the first compositions that anticipate the later often recurring merging of faces. Heads that seem to consist of two or three people, so called diprosopa: a moment of absolute harmony, balance, the perfect unification of soul and mind, of male and female, of nous and pneuma, animus and anima.

Over the next few years he will deal with those topics again and again. In countless smaller tempera works and in pastel. In addition to the topic of antiquity, which preoccupied him since the “Caryatids” and continued to pursue until the mid-80s, again in a more realistic manner: in the form of scenes with the sea, boats and amphitheaters, only to then return to the pure form, with much more clearness and a motif reduced to essentials.

He spends several months in Barcelona, in Paris, in Berlin. Then he returns to Greece, where he continues to travel around to finally settle down on the Cycladic island of Naxos for several 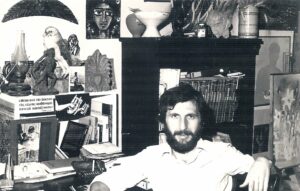 summers. He now has a small apartment in Athens in the Pagrati district. When he is not on the road, the studio is his place of retreat. In a series of works, exhibited in the Dada Gallery in Athens in 1986, he develops the theme of “animus, anima” opulently – with birds and wings and a multi-color schemes which are rather untypical for him. This is the result of a series of his works from the early/mid-1980s, created primarily on Naxos: characterized by a quick stroke style, a strong tendency towards the abstract and novel topics. The series for Dada is less “experimental” than market-oriented; It is what he himself understood as simple and beautiful painting and what was expected to sell well.

Pantelis Sabaliotis spends three long winters in Lund, Sweden (1985/86/87). There he was inspired by the endless nights for his trilogy “Archegoni nichta” (“Primal Night”). The increasing abstraction and the dissolution of forms are noticeable in it as well. In search of the very special light of the north, it is developing at a rapid pace. The women’s bodies are still realistic at the beginning, but the forms dissolve visibly in the course of the working process. At the end of the series of works are works of light and shadow, indefinable forms.

Sabaliotis is not a fan of repetition, as he made clear in an interview in 2003: He had times, the artist emphasizes, in which he sold beautiful and simple paintings well. If he had repeated this over and over again, it would have lost all essence for him and with it everything interesting to him.
“A certain type of painting was only important to him as long as he found himself in it for a certain period of time.” (wrote Maria Michaloudi-Angeli in an interview with the artist for “Proinos Typos”, November 2003).