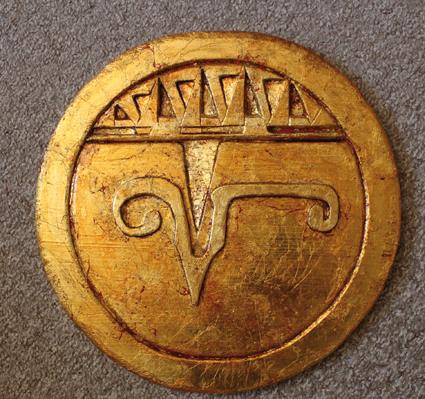 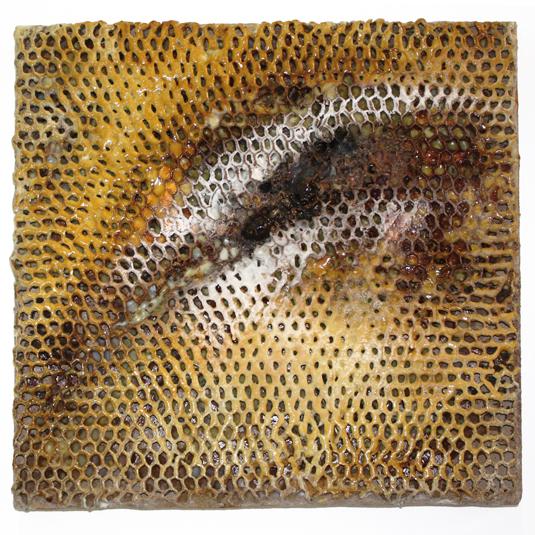 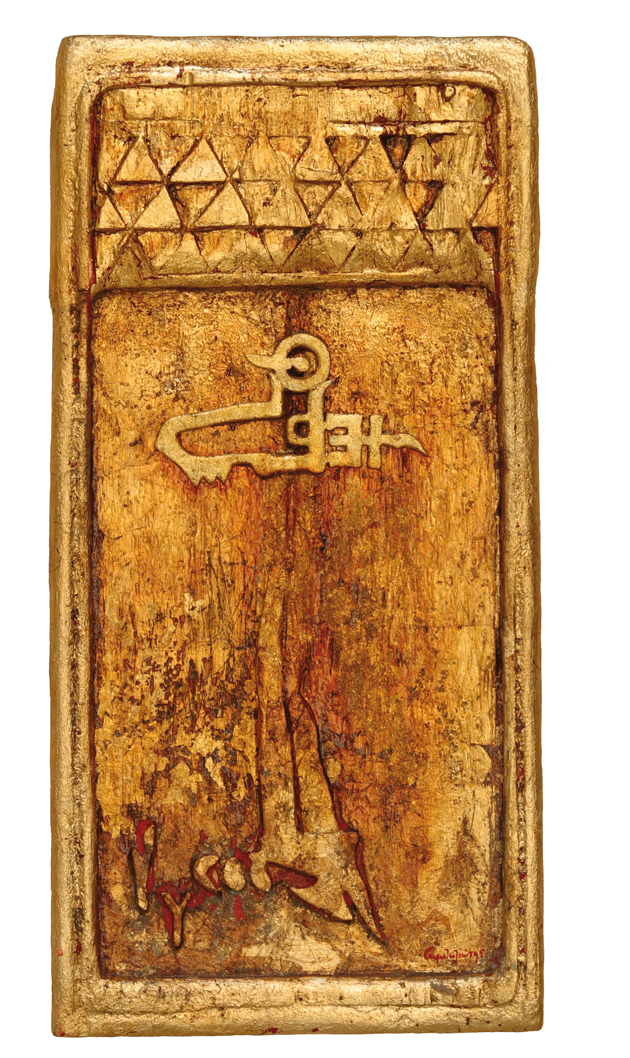 At the beginning of 2006, Sabaliotis moved into a new, larger studio: the UCW studio building in Berlin-Wilmersdorf – his last workplace. Two large interconnected rooms in the former health department, converted by the BBK, will be used for evening courses as well as the preparation of his upcoming exhibitions.
“Metaplaseis” (“transformations”) is what he calls his penultimate series, in which gold and leaf metal played an essential role. “The reflection of gold“, as the artist once said, “is like the idea that breaks free from the foundations of the subconscious and penetrates into consciousness.” In many of the works from 2004 to 2006 he tries to unite that contrast – to give space to oxidation, a progressive process of decomposition, next to the imperishable shine, an energetic dualism that lives from the contrast alone.

In 2006, after 25 years, he returned to the South of France, to Cordes-sur-Ciel, with his latest work. The city where his international career began, where his unmistakable series of works began. The time between the “Immigrated Caryatids” (1980) and the “Poetic Awakening” (1981) to the “Metaplaseis” shown at Maison Fonpeyrouse in 2006 includes an incredible artistic and personal development, from pastels and paper to Trojan women and the Centaurs, to the assemblage, to the Golden Age. From storyteller to alchemist and philosopher.

In 2008 he will present „Metaplaseis“ in Berlin, in the Körnerpark Gallery. In 2009, just one year later, he delighted with other, new works in the Wedding Gallery, the “Kypseles” – the honeycombs. It will be the last exhibition, he will open together with the Greek ambassador of Berlin, S. E. Tassos Kriekoukis. From now until his death in November 2011 he will work as a curator at Galerie Wedding, develop the gallery’s main program and organize a series of exhibitions himself, that have attracted great attention from the Berlin art scene. With internationally known Russian and Georgian artists, with artists such as David Evison and Sue Hayward, Rainer Fest, Boris Ivandic, Detlef Mallwitz, Corinna Rosteck, Ioannis Michaloudis. Cooperation with the ifa (the institute for foreign relations) and the Finland Institute follow. However, Sabaliotis is not only a committed doer and networker, he is also committed to the artistic development of children and young people. With formats such as the Berlin-Mitte Youth Art Award or the project Kids Guernica.

After the honeycomb, the artist’s attention returned to gold. The last series of artworks by Pantelis Sabaliotis, he would not complete, gives gold a completely different direction than in the “Metaplaseis”-series: the way he was once looking for the light of the north in Lund, he was now looking for a pure surface in gold. A liquid-looking gold coating that lays over the surfaces, he had “staged”. The almost molten, lively surface meant catharsis, clarity and spiritual purification to him. An energy boost to infinity. Golden like the light of the sun, spirit, immortality. It will become his own companion on his way into another dimension…

In the 40 years of his artistic work, Pantelis Sabaliotis has undergone a development that, in its complexity, can only be found in the greats of the art world. From realistic oil paintings to increasingly abstract pastels with mythological themes to the genesis of his own symbols, to object art, assemblages to oversized honeycomb paintings and sculptures. Myth and natural philosophy are fundamental to the series he has developed: from “Geohistorima” to “Living in Space” to “Kypseles” and “Metaplaseis”, he has always been able to inspire a large audience with his art. “A technocratic society“, he once said, “demands visions“. (From an interview with Frosso Pavlou, “Selides” magazine, 1999).

Pantelis Sabaliotis’ works facilitate a bridge between craft and philosophy of antiquity and questions that are becoming more and more essential to modern civilization.