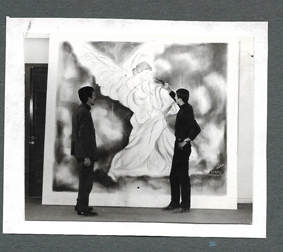 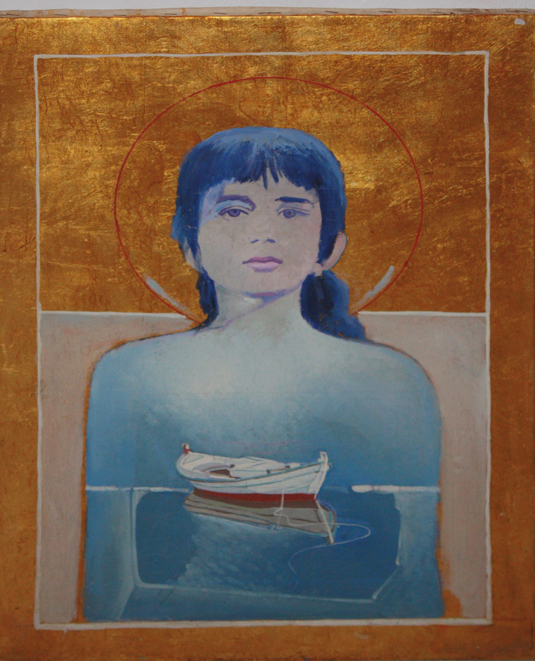 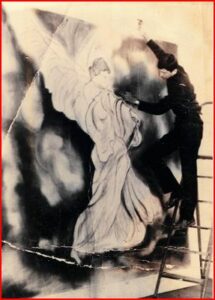 In 1969, at the age of 14, Pantelis Sabaliotis works as an apprentice for icon painting in churches, trying his hand at techniques handed down from antiquity such as tempera, gold leaf processing, fresco painting and encaustic painting. He graduated when he was only 16 years old and already clashed with his clients on his first commission. His idiosyncratic interpretations of saints were not met with enthusiasm by the churchmen. The young man’s prospects for a career are limited, but that doesn’t bother him, as he sees his path elsewhere. He now has his tools and learned the basics that offer completely different options, so he begins to work on his own projects with tempera, oil paints and canvas. Only a few of the first free works still deal with depictions of Christ or angels. It is only the wings, in various forms, that will accompany him and his works as a fundamental element in the years to come. From “Ouranios Podilatis”, the winged cyclist, who will become the coat of arms of Karditsa, his hometown, in 2020, up to his last exhibition “Kypseles” in Berlin in 2009.

The 16-year-old discovers the surrealists in books, which have presumably been banned by the military government (junta), reigning since 1967. He acquires his knowledge from forbidden books.  Meanwhile, many of the older intellectuals, many of the artists, have emigrated in order to live and find their freedom in other European cities. Sabaliotis stays in Greece and decides to fight for his freedom aspect. He teams up with others of his peers – who also do not want to be silenced. Protest events are organized, the most important being the “Mysterious Communion of the Peasants” in 1971 in the Karditsa City Theater. A happening, as we would call it today, with a play written by himself, with poems, pictures and an experimental art workshop. Lectures of texts banned by the government are hosted.

But Karditsa quickly becomes too confined for the 17-year-old. He wants to make a difference, to experience! The next stop is Athens, where he founded the gallery “Diamartiria” (protest) in 1972 together with other like-minded people – young poets, authors, artists and theater people. Events and readings take place here, writings and books get published. A protest against press censorship and limits in freedom of speech; a plea for a self-determined life.

In order to earn money, he starts to work at a small advertising agency. Here he will stay for about two years to create oversized – at the time still hand-painted – cinema posters, as well as filigree fonts, which, in various forms, will keep him busy from now on until his death.

In February 1973, Pantelis Sabalioti came of age and immediately received his military conscription order. Which he will obey,  otherwise he would have to face serious consequences. Like other “unwanted” political activists against the junta he is transferred directly to the Evros, the border river to Turkey in the northeast, where an escalation of the tense political situation is expected at any time. In the same year, at the beginning of November, there is a student uprising at the Technical University of Athens (the Polytechnio), which is bloodily put down. The uprising nevertheless heralded the end of the junta, which was finally over in the summer of 1974. The young artist immediately takes his chance (despite his military service lasting until 1979) and presents his first solo exhibition: “The Ordinariness of Dreams” in the Pialdi Experimental Theater in Athens. At that time, he is only 19 years old.

Pantelis Sabaliotis’ works made with egg tempera and oil are still determined by surrealism, thus he is mainly practicing realism, in which he implements his own themes for a while (1975–78). Paintings, that capture the rural life in his village, which are of what we would rather call “romantic”. Horses are often seen, perhaps because Thessaly was once considered the home of the best horses far and wide. Alexander the Great already knew that, so he equipped his army with them. It is not surprising that centaurs, half horse, half human being, also lived here at the start of the 1980s, the artist revived them in paintings, in his own unique way.

The artist is now observing more closely, more intensely. During this time, he created a lot of portraits: drawings, tempera, oil and pastel works. Sabaliotis reimagines himself again and again in the years leading up to 1979, switching between styles, from realistic to naive painting, from surrealism to geometric art. He imitates, he copies, he composes. In between, works emerge that laready clearly bear his signature. Girls, ethereal, mystical, from another world. The blue horse in a vacuum on a monochrome background. He finds topics that will determine his works for many years to come: horses, women’s bodies, the sea, wings, boats, doors that open into other dimensions.

In 1976, finally free from military service, Sabaliotis founded the first free painting school in Thessaly in Sofades, not far from Karditsa. He will have one more exhibition in Kastella (1977) and in Volos (1978). Then he turns his back on Greece to discover the world, and to finally see the original works of his great role models Picasso, Max Ernst and Gustav Klimt in Europe’s museums!