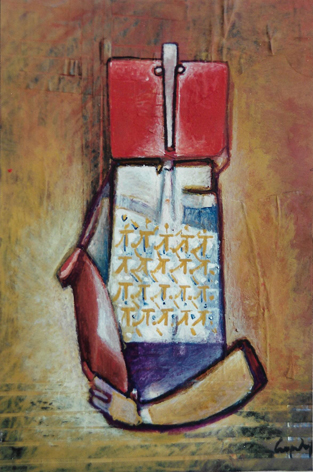 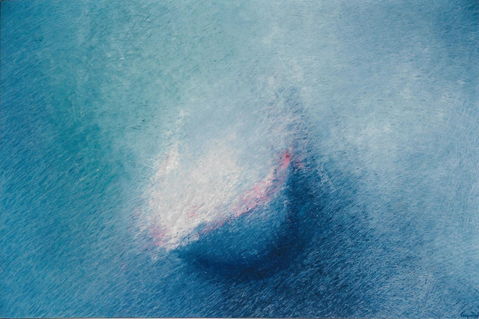 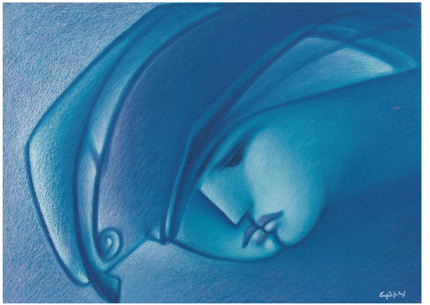 For the first time in his artistic life, Pantelis Sabaliotis finally settled down for a longer period of time starting 1988, after years of traveling. However, not on Naxos, he chose to stay on the Greek artist-island Hydra off the Peloponnese (1988–93). 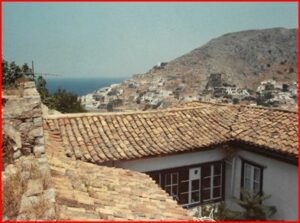 When Sabaliotis was not painting what he was feeling, he was reading. He felt particularly close to ancient philosophers and Greek mythology. He dedicated a whole series of works to a myth of a woman: Venthisikimi (Benthesikyme), daughter of Poseidon and Amphitrite, Queen of Ethiopia, who fled into the depths of the sea to hide her incredible beauty forever from the pursuit of an
obtrusive admirer. The “Benthesikyme” series of works shows the Greek profile with a final clarity for the last time in Sabalioti’s work. It revolves once again and explicitly around the woman herself, around the perfect union of animus and anima. While the feminine as perception remains elementary in his work, he was never to return so clearly to the figurative thereafter. 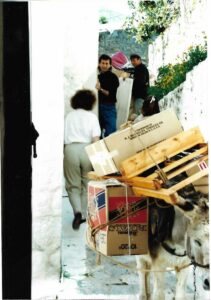 Besides the myth about the young woman “venthisikimi” also means heavy or deep wave and thus describes the condition that precedes a flood, with which life once began for the Thessalians. For Pantelis Sabaliotis, this myth also stood for the beginning of science and philosophy, for explanation and examination of nature. While dealing with the myth itself, his artistic work also changed on Hydra. It almost seems like a natural evolution, that lead him to natural materials, larger formats, object art and assemblages as well as the renewed examination of beeswax.

With growing passion, he collects natural materials like pieces of cacti, scrapes rust and salt from skeleton shipwrecks (including the famous one on Zakynthos), harvests driftwood and turns them into art. A glorification of nature, in which he lets her, mother earth, speak to us without changing the actual matter. Flotsam, plant residues and metal grates merge into art objects, which in turn transform movement, light and energy – key elements of nature. He calls the series of works “Geohistorima“, history of earth. A few years later he will continue this for a short while in Athens (1993–1996), but then increasingly devote himself to large-format canvases. Those he rediscovered on Hydra with a renewed interest in oil and acrylic paint, after many years of oil pastel and smaller formats. 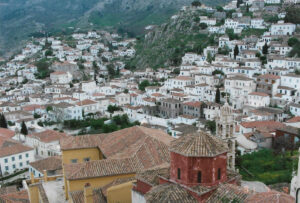 What he had started in Lund, Sweden in the mid-80s in three long winters as the trilogy “Archegoni nichta” (“Primal Night”), namely a search for light defined in black and white in female bodies, developed consistently, now advances in color – often monochrome – continuing in increasing abstraction. At first it was about light, about “Reflections”, about resolution. Then it was about even larger, abstract bodies (“Somata“) again, unfolded or combined in a multilayered organic form: primordial cells, clusters, occasionally supplemented by stylized wings. The large exhibition in the Karditsa Pinakothek, December 1997 (“Orosima“, Milestones), mirrors this milestone in his work. Some of the works, like the “Geohistorima”-series, were transferred to its permanent exhibition, and were acquired by the city in 2000.